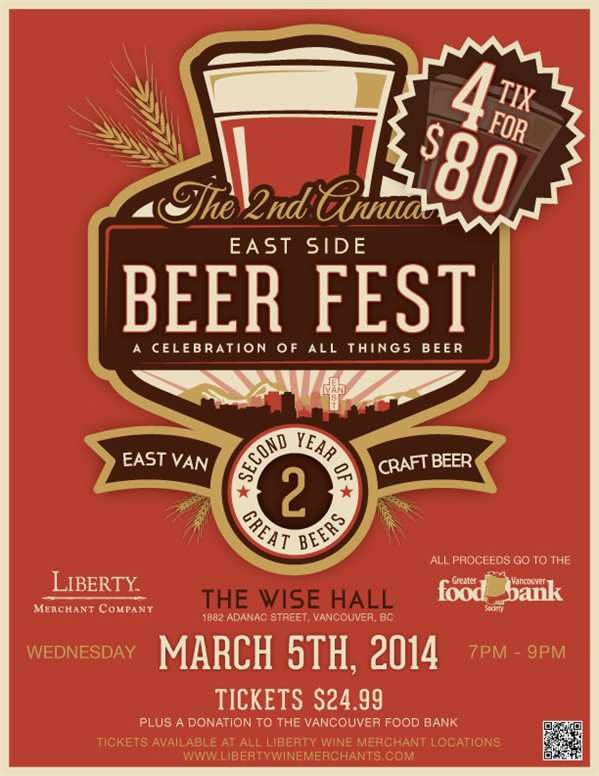 If you are looking for a reason to justify a mid-week craft beer session, look no further than Liberty Wine Merchant's 2nd Annual East Side Beer Fest to be held Wednesday, March 5th at the WISE Hall, located at the corner of Victoria Drive and Adanac Street.

The event, organized by Liberty's Commercial Drive location, is donating all proceeds from the event to the Greater Vancouver Food Bank and is asking all who attend to also bring a non-perishable food item to the event which will also be passed on to the food bank.

Last year's inaugural event was a sell out which helped Liberty donate $4,287 to the Food Bank along with the food items donated at the door by thirsty craft beer lovers. This year's event has a great line up of breweries and beer importing agents lined up (see list below).

"For the 2nd Annual we have decided to go with a mix of new vendors and old, half from B.C. and half agents importing world class beers," stated Liberty Commercial store manager William Ford. "Some notable new additions are recent start-ups Four Winds and Bomber Brewing and new agents UnTapped, Modern Malt and new-to-us Bravo."

As an added bonus, Liberty have confirmed that their own nano-distillery, The Liberty Distillery, will be pouring samples of their vodka and white whiskey.

Food will also be available from various Commercial Drive businesses to help soak up all the great craft beers and artisan spirits on offer. Don't wait until the last minute as last year's event had no tickets available at the door due to being sold out ahead of time.

The event runs from 7-9 PM with tickets running $24.99 each or 4 for $80. For more information on the event and where to get tickets check out Liberty's event page here.