More BC Craft on Tap on the Way 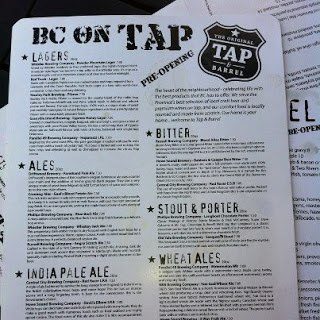 Back in January, while looking ahead at what was in store for local craft beer consumers in 2013, I mentioned that one of the highlights in my books was the fact that Tap & Barrel were opening a new location Downtown, off Jack Poole Square at the Trade and Convention Centre.

For those not in the know, Tap & Barrel, located at 1 Athlete's Way in the Olympic Village, is yet another venue to enjoy great craft beer in Vancouver, this one with a spectacular view of False Creek, Downtown and the Coast Mountains, and 24 taps of BC craft beer.

Yes, that is right, 24 BC taps of craft beer with not an American beer to be seen on the menu, at least with draft beer. I have nothing against the great beers from our American cousins, but I strongly believe that here in BC we have not only caught up to many of the breweries in California, Oregon and Washington States, but surpassed them at their own game, which is pushing the norms and limits of beer styles with creativity and daring.

And, in my opinion, not enough credit is given to our local breweries and brewers.

Come this summer, Daniel Hospitality Group (DHG) is set to up the ante with the second Tap & Barrel location, located on the west side of the Trade and Convention Centre. Tap & Barrel II promises to be bigger and better and yes, they will be still all BC craft beer on tap, but this time with 32 taps plus two beer engines for casks! Like the original location, they also offer BC wines on tap - 16 at the Olympic Village and 28 at the new location. And the view from the new location should be even more spectacular than the False Creek location, which is hard to beat on a warm summer day.

"I have had my heart set in this location since before the Olympics," wrote DGH owner, Daniel Frankel, in an email to VEBB. "I've been negotiating and working on this deal for 3 years now, believe it or not. Good things are worth the wait apparently."

Although highlighting BC craft beers is not unusual in Vancouver's craft-beer friendly establishments, being BC only, especially with the number have taps Tap & Barrel has is unprecedented as far as I know.

"A very large part of the concept was and is sustainability and being committed to local purveyors/suppliers," wrote Frankel. "I've always felt that local BC products are extraordinary and that we need to support our local economics as well. This is sustainable in more than one way - not only environmentally (reducing the carbon footprint), but also economically sustainable. Also, we've got great craft product right in our own back yards and we're very lucky to have this, so why go elsewhere?"

"For years I've gone out and seen import products on tap, and I've always wanted to see a huge array of taps celebrating our own province, committed to our products."

Frankel's commitment to local does not stop with his beer and wine as he is staying local with the restaurant's design and decor.

This may seem like a rah, rah, Tap & Barrel post and well, it is. I just happen to be an advocate for locally produced beers and if I have the choice of drinking a BC craft beer over a beer brewed anywhere else, if they are close in quality, I will choose BC 95% of the time. I love the fact that both  Tap & Barrel locations are in high-traffic tourist areas, giving exposure for our local beers to out-of-towners,of the non-traditional and traditional craft beer drinkers variety.

Which is why I hope others take notice of the BC on Tap and get on board. We have amazing beers here, we should celebrate them. Look for Tap & Barrel II to open some time close to June. I will have located out of town by that point, but you can be sure it'll be on the top of my list of stops when I come back to Vancouver to visit.
Posted by Paddy Treavor at 1:06 PM