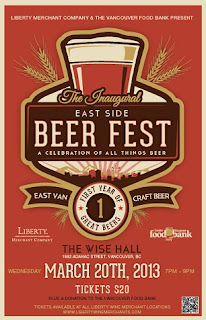 How do you feel about combining the activity of drinking world-class craft beer and helping feed Vancouver's hungry and less fortunate citizens?

In support of the Vancouver Food Bank, and as a thank-you for the support of local craft beer consumers, Liberty Wine Merchants of Commercial Drive is organizing the "Inaugural East Side Beer Fest", March 20th, 7pm to -9pm, at East Vancouver's WISE Hall, located at the corner of Victoria Drive and Adanac Street.

Admission is $20, with tickets currently available at all Liberty Wine Merchant locations, and a non-perishable food item for the Food bank, to be dropped off at the event. The event is described as "self-guided" and the tasting is included in the entry price meaning no tickets or tokens need to be purchased inside the event!

Driftwood, Parallel 49, Howe Sound, Lighthouse, Mill St., Propeller, Beerthirst, Copper & Theory, Beverage Concepts and BrewDog have been confirmed with more participants to be announced. There will be a few local, artisan food booths in attendance and hopefully, if things go to plan, one whiskey booth, although nothing has yet been confirmed as to who the whiskey vendor will be.

You may be wondering why a store known for selling wine is organizing a beer festival. If you have not been into the Commercial Drive location, and you love craft beer, you should pop your head in the door.

"Beer has been chosen because we have noticed that east side residents are passionate about beer and, more specifically, passionate about craft, artisanal ales," stated Ford. "We listen to our patrons and try to work together with them to offer the best service and selection we can."

It is my local bottle shop and I am never disappointed with the great beer selection when I go in. Within weeks of opening, this Liberty location had already put together a great inventory of craft beers, with a particular focus on Belgian beers. Ford, like all Liberty managers, has been given the leeway to tailor his stock to local tastes. I actually selfishly hesitated about writing this post as I would love to keep Liberty the hidden secret that it is where I can often find the limited releases, for decent prices, that local beer nuts scour the city in search of, after they have disappeared from the shelves of other stores.

"What's unique about Liberty Wine Merchants is that each store has it's own personality that is shaped by the demands of their demographic as well as the workers in that store," says Ford. "Commercial Drive has noticed our craft beer selection has been a hit over the past year so we decided to host a charitable tasting event with that focus."

Prices are also very reasonable at Liberty compared to some other liquor retail outlets. Because they are located just a block or so from the government liquor store, Liberty has to be competitive.

"We want people to know that we work tirelessly to hunt down the best values in the market and I think our prices reflect that," reports Ford.  "A testament to that would be that all of the government-store listed items will be on our shelves for less than a loonie more. This is a good reason why we are the #1 LRS for the Central City Red Racer IPA."

Hopes are that this festival will be a success and turn into an annual event which will allow Liberty thank their supporters while giving back to those in need in the community. At $20 plus a non-perishable food item as the admission cost, it is a great deal and helps support those less fortunate in our community by helping them put food on their table.

Seems like a win-win situation to me.
Posted by Paddy Treavor at 9:57 AM