43% Price Hike Does Not Sound Like Happy Hour to Me 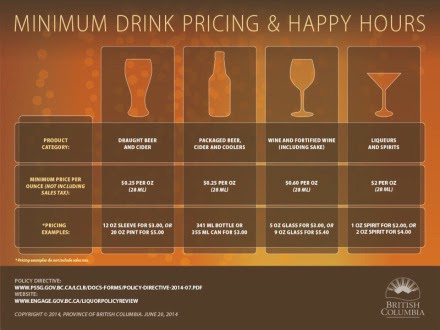 Friday afternoon the Liberals announced that BC alcohol licensees, as of the time of the announcement (read policy directive here),  are now free to have temporary drink specials, otherwise known as happy hour.

But before you run down to your local pub looking for a 2-for-1 special, know that with the new minimum
drink pricing of $0.25 per 28 ml (one ounce) that was tied to the happy hour announcement, many beer drinkers in BC will see the regular price of their pint increase significantly, especially in more rural areas of BC.

At $0.25 an ounce, a pint works out to $5 before tax. My local in Powell River, for example, charged, before yesterday, $4.50 a pint (yes a real pint), tax included, for craft beer on a regular basis. Now that price will have to increase to hit the new minimum standard.

I will now pay more for my pint at the minimum "happy hour minimum" price threshold, before tax, than I was on a regular basis, with tax included, in my local and many other establishments in my town.

This situation is not atypical to my local as economies outside the Lower Mainland are completely unrelated to Vancouver and big city prices due to variety of reasons, like the lack of high paying jobs or the necessity to rely on seasonal work to make ends meet. This new minimum pricing did not take that into consideration, or the BC Liberals and their crew of civil servants and bureaucrats who wrote the policy just did not care that this price hike may mean less business for small town pubs and those establishments that cater to the less affluent here in BC and less opportunity for those with low income to get outside of the four walls of their homes to socialize over a beer at their local.

And in areas like the outrageously priced Vancouver, where a pint often can run $10 after tax and tip, those places with great daily specials, like Martini's on Broadway for instance where a pint is, excuse me, was $3.50 on Wednesdays, because the new minimum drink pricing they will have to increase their "special" prices.

Using Martini's as an example, the price hike will be 43%!

It is obvious that Justice Minister/Attorney General, Suzanne Anton, her Parliamentary Secretary, John Yap and those they charged with shaping the new BC liquor policy "modernization" caved to the pressure from special interest groups.

Certain hospitality industry associations have been pushing against happy hours from the start as increased competition from lower booze prices during happy hours means less dollars in the pockets of their members. Big chains do not want to have to compete with smaller, independent establishments which are more likely to lower their prices for happy hours in order to lure customers through their doors.

And I warned you all in the past to be wary of the fact that government were listening closely to health officials about minimum pricing for booze in BC.

Health authorities and their advocates have been pushing for higher booze prices and less access to alcohol from the start of this process using statistics from vague, unnamed studies and scare tactics to push their agenda forward. When I had the opportunity to discuss this issue on radio on CBC (scroll down to Oct 31st) head-to-head with Fraser Health Medical Officer, Dr Lawrence Loh, he ran out a stat that 37% of people who present at BC emergency departments have had a drink of alcohol within 12 hours arriving.

My response - what percentage of people in BC who consume a drink of alcohol do not present at an emergency department within 12 hours? That is a stat I would like to see! I guarantee you it is the 99% or above range.

The good doctor had no response to that. Stats can be twisted and manipulated any which way in most cases, depending on how you pose the question.

Actually, a great point, but then, to bolster his argument 5 minutes later, he started spouting off stats from studies done in other jurisdictions that supported his point of view, contradicting his warning not to look to other places where booze is viewed in a different light than conservative BC.

This happy hour-minimum pricing policy is an epic fail for consumers in many areas of BC. As with the issue of alcohol in grocery stores, John Yap and those involved in the process from the government side, have completely misunderstood or completely ignored the real wants and needs of the alcohol consumers in this province. I am not sure if they are believe their own bullshit that they are listening to consumers and giving consumers what they want because clearly, they are not.

The government has quietly backed away from their promise to tie beer prices to alcohol content and instead have just nailed everyone. At the end of the day, the BC Liberals are not modernizing anything. They are making changes that look great but really have no effect in reducing the Nanny State that exists in BC related alcohol policy.

Now, if you don't mind, I am going to head down to my local and celebrate the return of happy hour in BC by paying $1.50 or so more for my pint than I did on Thursday.

Thank you John Yap, Suzanne Anton and all of those involved in this asshattery called the return of happy hour to BC.
Posted by Paddy Treavor at 11:07 AM