Storm Back to Full Force After LCLB's Quick Action

Storm Brewing's owner, James Walton, breathed a sigh of relief this afternoon after he was given the go ahead from the Liquor Control and Licensing Branch (LCLB) to carry on with business as usual after receiving his on-site retail endorsement and passing the LCLB on-site inspection.

This brings to an end a mercifully short and very unpleasant chapter in Storm's history after Walton was contacted Monday by a LCLB liquor inspector and advised his sales of kegs and growlers to the public, which make up 50% of his business, were in contravention of his license therefore he had to cease these sales immediately or he would be completely shut down (read here for background detail).

The tone of the cease and desist command and the often slow response times of the LCLB scared Walton and had him believing his business of 19 years was in jeopardy.

The root of the problem was a memo Walton received in 2008 (see end of post) notifying him  the LCLB had taken over the responsibility for direct sales and on-site retail for breweries from the Liquor Distribution Branch (LDB) and that licensing requirements were changing.

"I should have read the memo (more closely) a long time ago," admits Walton who has never dodged the fact he is ultimately responsible for the mess he found himself in this week. "I just assumed that the liquor board (LCLB) would just carry on with what was in place."

"The heavy handedness (of how he was treated by liquor inspectors and LCLB initially) made me pissed off," says Walton who believes, like myself and many others, that this could have, and should have, been handled differently, without the unnecessary threats to his livelihood as it was an honest mistake and he was doing all he could to comply once he found out he was in contravention of his manufacturer's license.

This is a prime example as to why our BC liquor policies and the way the LCLB and LDB operate need to be reviewed and overhauled. It is obvious from this example, and trust me, there are many more, that the LCLB do not communicate very well with the LDB and where one says, go ahead and sell and make the province money, the other says stop selling, that is illegal.

It is also an example of how liquor inspectors have far too much power and can make decisions, acting as the enforcement, judge and jury with little accountability as licensees are terrified of being targeted. These decisions often have huge, far reaching impacts on people who have not necessarily been trying to contravene LCLB policies.

I want to take the high road and say that the liquor inspectors involved and the LCLB expedited the process and fixed things for Walton in less than 48 hours because it was the right thing to do but rarely have I seen the LCLB respond so quickly or have I had politicians respond to social media the way they did in this case, which leads the cynic in me to think they realized this was a public relations nightmare.

The social media storm, public pressure and the attention from some major media outlets that occurred after the story got out certainly got the attention some high-ranking politicians and, no doubt, the LCLB brass who do not want this type of controversy during the current province-wide liquor policy review which has current LCLB policies and methods of operation under a microscope, along with everything else associated with alcohol policy in BC.

Yesterday, John Yap, the Parliamentary Secretary to the Justice Minister Suzanne Anton, reached out to me on Twitter to tweet, "I (Yap) understand that LCLB is expediting the process & expects the manufacturer will have the proper endorsement within 3 days," in response to my blog post and the social media support for Storm. Yap, is in charge of the liquor policy review and reports directly to Anton, who is ultimately in charge of both the LDB and LCLB.

Walton, despite his feelings that his treatment was heavy-handed, believes the LCLB acted in good faith but does acknowledge the public support played a role in holding the LCLB accountable for how they handled things.

"(The liquor inspector) said he would expedite the application and he did," states Walton. "The pressure from the public on social media was likely a factor but I've always had a good relationship with LCLB in Victoria. The guy that sent my receipt for the payment was downright friendly."

Before putting this to rest, I just want to clear up a few things.

Firstly, Walton did not approach me or ask me to write the original post. I was notified by someone in Powell River, where I live, who thought I might know what was going on because I have Walton for 15 years. My experience is that Walton is one not to seek the media spotlight. He is also one who owns his mistakes openly, as he has here. But this is a story with two sides and it is important that we, the public, hold politicians, and the bureaucrats who work under them accountable for their actions.

I will also say that the only voices of decent I had were from a people in the craft beer industry. Some thought I was making a mountain out of a mole hill and told me so. I was told "same law for all" by more than one person and my response is, yes, this is true, but when the interpretation and enforcement of those laws are arbitrary and inconsistent, as they often are with the LCLB, no one is safe, no matter how hard they are trying to comply with policy and regulations.

I'll be sure not to come on too strong with my support, r my efforts to mobilize support, for those who feel I was making a big deal about nothing when the liquor inspector knocks on their door and tells them black is white and up is down, jeopardizing their businesses and means of making a living.

On that note, on to more important things like cracking this growler of Brassneck white IPA that made its way up tot he Upper Sunshine Coast last weekend. 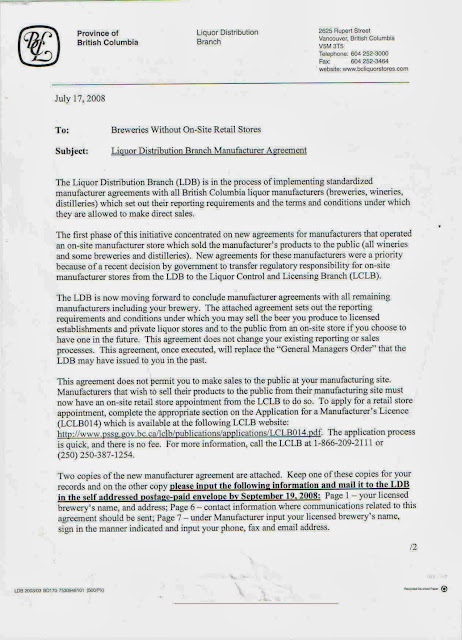 Posted by Paddy Treavor at 8:59 PM