There may be hope for craft beer lovers heading to Mexico after all.
It seems my January 12, 2011 post, entitled In Search of the Ultimate Cerveza - Final Chapter, may have been a bit premature when I wrote about the lack of a craft beer scene in Mexico and the apathetic attitude from the locals about the need for one. Although I could find no evidence of craft beer during my month in Acapulco/Mexico City last December and had not been able to locate any suds of quality on my many previous trips to various parts of the country, it appears there is a craft beer revolution afoot, spearheaded by a small-but-passionate group of Mexican craft brewers and craft beer advocates who are fighting tooth and nail against Mexico's big two breweries, Grupo Modelo and Cerveceria Cuauhtemoc Moctezuma, who have dominated and controlled the country's beer scene for decades.
Can it be true that finally Imperial stouts, barley wines, IPAs and Belgian wits, Mexican style, are muscling out the light lagers from Mexico's tavernas and beaches?
Will I finally be able to find and enjoy brews with body, flavour, hops and 5+ ABV while vacationing in the sunny clims of Mexico?


Yes, it appears so, but don't expect to find these artisan beers to be widely available. As with the craft beer scene here in BC, circa 1990, it does exist, you just have to know where to look for it and in a country of 112 million+ inhabitants, it can like looking for a needle in a haystack if you don't know where to start.  Trust me, I have been looking for that damn needle for years.

As with many things in my life, I stumbled upon this information through no effort of my own.

This past week I had two separate friends, completely independent of each other, alert me to the fact that there is craft beer being produced in Mexico. One friend told me he had spoken to someone who had recently attended a Mexican craft beer festival and immediately thought of my blog post and my voiced frustration of not being able to find anything but macrobrews will on my last vacation there. A few days later another friend forwarded me an excellent article written by Cristian Salazar, of The Associated Press, dated May 5/11, about the Mexican craft beer movement. This was too much of a coincidence for me so I thought I'd continue my search for the ultimate cerveza virtually and do a little investigation.


Despite the fact I have searched on-line, as recently as Jan/11, for info on craft beer in Mexico and found none, I found plenty of websites (in Spanish) and a few good articles, in English relating to Mexican craft beer this time around. In keeping with Mexican history and tradition, the craft beer movement mentioned in the Salazar article has the revolutionary-sounding name Por la Cerveza Libre (For the Liberated Beer) and the idea for it was apparently hatched in a Mexico City pub designed to look like an illegal, Prohibition era speakeasy.


If my Spanish skills are up to speed, according to info on the Por la Cerveza Libre website, the two big breweries have tied up 95% of all establishments who sell/serve beer in Mexico with exclusive contracts. I can vouch for the fact that the two main chains of convenience stores, Extra and Oxo (similar to 7-11), are exclusively tied to either one brewery or the other. The site also states that for every 1,000 beers consumed in the country, only two are craft beer. Other statistics and articles state the ratio is 8 craft beer per 1,000 but even that is a drop in the bucket and shows just how little headway the craft breweries have made into the Mexican beer market. Por la Cerveza Libre want to change all that and state in a written manifesto they want, "to choose what we consume based on our tastes, translates as free choice, a fundamental right of every person."  The group are hoping to use social media, such as Facebook and Twitter, to support and promote establishments serving and selling craft beer to spread the word. 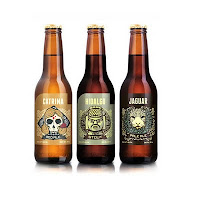 True to form, like all revolutionaries, the Mexican craft brewers are up against it - out manned, out gunned, and going up against the establishment, backed by the full weight of the ruling elite and who want to keep the status quo. They number somewhere just shy of 20 and are at a distinct disadvantage, so it won't be easy for them to grow and grab a greater share of the market. Tied houses and trade practice inducements are alive and well in Mexico which is how the two big breweries have managed to secure exclusive deals with most retail chains, restaurants and distributors. Many of the breweries have had to take advantage of the lack of tied house regulations and start their own restaurants/pubs/liquor stores in order to sell their beers. Two of the bigger craft breweries, Minerva and Primus, have banded together to open a chain of pubs/retail liquor stores, kitted out to look like Prohibition era gin joints and speakeasies, called El Deposito which are are based mainly in Mexico City, Guadalajara and Puerto Vallarta and which feature dozens of Mexican and imported craft beers. In fact it was in one of the El Depositos that the forces behind Por la Cerveza Libre hatched their plan. I was also able to locate websites for another chain of tavernas and boutiques called The Beer Box which feature a array of craft beers both domestic and imported as well. I even noticed they sell Old Rasputin, which although not Mexican, I would happily drink after a stressful day on the beach.
﻿
Distribution and sales are not the craft brewers only hurdles they need to clear to compete in the market with the big boys. As is the case here, craft beer tends to be more expensive to brew, due to the use of traditional, quality ingredients, many of which have to be imported into Mexico and due to the fact that they brew in much smaller batches compared to the large macrobreweries. As well, most brewing equipment must be imported and when dealing in Mexican pesos on the international market this can be quite costly. When I add together nearly non-existent distribution and sales points, higher production costs, the terrible economy that you find in Mexico, non-existent tax breaks from the government and the extremely small craft beer culture that exists there, I understand why I have had trouble finding these beers. There are more and more craft beer-friendly establishments trying to make a go of it, due in large part to the brewers showcasing their own brews by starting their own pubs and restaurants, like El Deposito.  The brewers are also banding together to bring attention to how the big two breweries have been limiting consumer choices and dictating what types of beer are available on the market. If you look at the end of the post, I have included a list of craft-beer establishments taken from the Por la Cerveza Libre website. It is not an all-inclusive list, but it does give you a starting point if you are searching for good beer in Mexico.

Despite all the odds stacked against them, some of the Mexican brewers are pushing the limits and challenging Mexican palates by introducing styles never-before produced in that country. Instead of light lagers and Viennese pilsners, the craft brewers are producing a variety of styles including imperial stouts, porters, IPAs and Belgian style beers. I even read one brewery, Mexicali's Cerveceria Cucapa, has released a tequila barrel aged barley wine! I would love to get my hands on a case or two of that for my beer cellar. It is going to be a battle with my wife for space in our luggage the next time we return from visiting her family in Mexico if I can get my hands on any of these beers. Instead of bringing home bottles of tequila, it will be tequila barrel-aged barley wine!!

Mexico is also now also home to the second biggest Latin American beer festival, which has only been in existence since 2008.  La Festival de la Cerveza  (The Festival of Beers), is held each year in Guadalajara, Mexico, the country's second largest city and one of the craft beer epi-centres. The festival last year featured 24 different breweries, both micro and macro, from Mexico and around the world. The notes on the festival's web page stated they could accommodate up to 10,000/day, but there was not actual stats as to how many attended. I had to laugh when I read the ticket info, which listed the event at 40 pesos ($3.5 Cd), with ninos gratis (kids free)! I couldn't find any info about when next year's event will be held from the website but I have fired off an email requesting information...at least I think that is what I wrote in Spanish. I have holidays next October and would love nothing better than to head south so I can check out the festival and the craft beer bars so I can give a firsthand report. 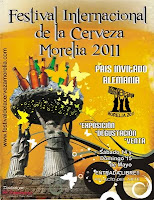 My wife, who was born and raised in Acapulco and whose family still resides there, is very excited I have stumbled upon this information and not because she is curious to see what Mexican craft beer tastes like. She is a Corona gal, who will, if there is no choice, sip a Keeper's Stout or three, so craft beer is not a draw for her. No, she is excited because after spending all of our holidays in Mexico the last two years, I was leaning to going somewhere else. Now, she knows that the siren's song is calling me back south and that I will not be able to resist heading back to Mexico next October to discover what the craft beer scene there is all about. I see it as a win-win-win situation...my wife gets to visit with her family and vise versa, my in-laws get to visit with their granddaughter and I get to sneak off to do more "research" in search of the ultimate cerveza.
Por la Cerveza Libre!
Vive la Révolution!!!
List of craft beer friendly establishments in Mexico (Taken from www.lacervezalibre.tumblr.com/)
Posted by Paddy Treavor at 4:44 AM