They were so close to doing the right thing but in the end the BC Liberals did little too correct their epic failure regarding new drink price minimums in BC.

In what can only be described as a knee-jerk reaction to negative feedback received concerning the controversial liquor drink price minimums announced June 20th, the BC Liberals send out a notice today that they were , "(c)reating a new category for draught beer and cider servings 50 oz. and over - with a minimum price of $0.20 per oz," to "better meet the expectations of British Columbians".

Today's announcement stated that draught beer servings over 50 oz (1420ml), otherwise known as pitchers, will have a minimum drink price set at $0.20 per ounce/28ml but all other draught beer serving sizes will remain at new minimum of $0.25 per oz/28ml which is by far the highest in Canada.

For the record, even the new pitcher category, at $0.20 per oz/28ml is still the highest beer minimum in Canada. 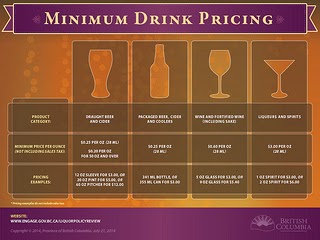 Parliamentary Secretary for Liquor Policy Reform, John Yap, was quoted in the announcement as saying,


"The B.C. Liquor Policy Review has been centred on listening to the views of British Columbians and industry stakeholders, and best aligning any changes we make with their views. Upon reviewing B.C.’s minimum prices, we realized they weren't on par with consumers’ expectations and we took action to find a fair compromise that still upholds B.C.’s high standards for health and safety.”

I am curious how he came to the conclusion that encouraging consumers to buy the biggest serving size possible "upholds B.C.’s high standards for health and safety"?

Friend 1: "I see that a pitcher is cheaper by the ounce than a 16-oz sleeve! I was just going to have one sleeve but why don't we order the pitcher so we can take advantage of this great deal?"

Friend 2: "Yeah, I was just going to have one as well, but to Hell with it, lets get the pitcher. One or two extra beers never caused anyone any harm...by the way, are you driving home?"

As craft beer drinkers, this change will impact us in a very limited way. Very few craft-beer-friendly places serve pitchers as most craft beers are stronger in alcohol so licensees do not feel it is appropriate to offer the bigger serving sizes. In fact, fewer and fewer licensees are even offering pitchers any more as, more often than not, draught beer serving sizes are being reduced to the ever-shrinking "sleeve" glass.

This change will give some slight relief to those who enjoy the mainstream lagers that have dominated the Canadian market for decades but, as mentioned, they will still be paying far more for their happy hour pitchers than in other provinces in Canada.

This is a bizarre move by Justice Minister-Attorney General, Suzanne Anton and Yap and I really wonder if they do think they are "listening" to British Columbians and that this change will placate the masses who are seriously pissed off about the June 20th minimum drink price-happy hour announcement. Don't get me wrong, today's announcement is a baby step in the right direction, but at the end of the day, I would have to say that the BC Liberals and those dealing with the liquor policy reforms have shit the bed once again.

They cannot really believe we are that stupid to believe this small, token change fixes the EPIC FAIL that is our new minimum drink price standards.

I will be writing more on this subject over the weekend but just wanted to get a quick post out there to let everyone know what was going on.
Posted by Paddy Treavor at 1:34 PM