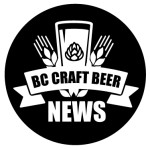 The publication, launched by craft beer lovers Kenn Dubeau and Julia Chalifoux, is, according to the introduction in the newspaper, "dedicated to the promotion, growth and enjoyment of craft beer and brewing culture in BC," and features contributions from many well-known personalities from the BC craft beer community including the Thirsty Writer, Joe Wiebe, who is currently touring the province promoting his new book, Craft Beer Revolution: The Insider's Guide to BC Breweries , and well-known beer blogger/rantmaster extraordinaire Chuck Hallett, better known as Barley Mowat.

See below for a complete list of contributors for the first edition.

"I think the timing for BC Craft Beer News is right," wrote Chalifoux in an email to VEBB. "There is a lot going on in the world of BC craft beer (and spirits and cider) at the moment. Having a dedicated source by which people can be informed, educated, entertained, heard and have the opportunity to connect is very important."

The BCCBN has printed 15,000 copies for their first edition, which, as the name alludes to, focuses on BC craft beer, but not exclusively so. Page 12 is dedicated to craft cider, with an informative article by Cinder Monger. Future editions will also include articles about the BC artisan distillery industry as well, as the newspaper understands that those who are interested in craft beer recognize quality products and most likely support the other local craft alcohol industries.

But make no mistake, this is a BC-based publication focusing on our vibrant and growing craft beer industry.

As Joe Wiebe states in his book's introduction, "welcome to the revolution".