BC On Tap - Every Month Can Be BC Craft Beer Month 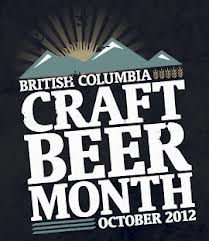 October is upon us which means it is, once again, BC Craft Beer Month (BCCBM).

For those of you who do not know, October was officially declared by the BC Provincial Government in 2011 to be BCCBM, a month that, according to the official proclamation, "will feature a celebration of British Columbia craft beer".

The month is meant to be a time for those who support the local craft beer industry to shine the spotlight on themselves, by creating their own special celebrations which highlight specifically the world-class, craft beer brewed here in BC and raise awareness as to just how successful and important the craft beer industry is here in this province.

More importantly than that, it is an excuse for us who love to tip back a jar or three to get out there and enjoy the BC craft beers that we love.

Although it happens less frequently these days, often our local craft beers get over-shadowed by the amazing beers, and the buzz they create, imported from well known craft breweries down south. In my opinion, it was when these great US beers started arriving on the scene here in BC that the local craft breweries really started to push themselves to create and brew more unique and interesting beers to keep up and hold their places in the local market. Although there was a definite craft beer scene here, especially in Victoria and Vancouver where there were some great beers being brewed, it was these US beers that really started to educate the consumer here in BC as to what craft beer was all about and pushed it out into the open, beyond the beer nerd scene and CAMRA crowd.

In the past five years or so local brewers have not only managed to keep up with their very talented brewing cousins to the south, but have often surpassed them at their own game which is pushing the limits and challenging the norms of how beers taste and pushing the boundaries of recognized beers styles to create new styles and beers others try to emulate.

BC craft beer plays second fiddle to no one these days and one Vancouver establishment, Tap & Barrel, celebrates that fact every day of the year, not just during BCCBM.

This is not a review of the Tap & Barrel, although I personally really like the place and love what owner Daniel Frenkel and his staff  are doing there. No, you will have to go there yourself to judge whether you enjoy the place or not. I think you will, but I have been known to be wrong before. 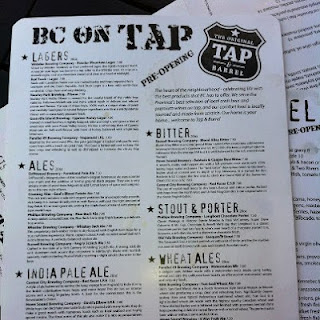 What I want to highlight is the fact that Tap & Barrel has 24 beers on tap and all are brewed in BC breweries. They embrace and highlight the local scene on a daily basis and are none the worse for wear for doing so because our craft beer industry is producing more than enough great beers to occupy the 24 taps on offer there. And they are just scratching the surface, pouring only a fraction of the good BC beers available. Hopefully, as they get going and gain popularity, they can begin to rotate some of their taps and include some of the great beers and breweries that are not currently represented on their tap list. Hopefully, if they are successful, and I see every indication that they will be, more and more establishments will expand their beer menus and will focus more on our locally produced beers. Tap & Barrel are not the only licensee who boast an all-BC, craft line-up, but I do believe they do have the biggest selection of BC-only beers. If I am wrong, please send me word of where I can find a larger selection of BC beer, and only BC beer, on tap.

The fact that a restaurant like Tap & Barrel can go with an all-BC, craft line-up on their draft beer list - they do offer some macro lagers and imported beers on their modest bottle list - is something I could never of imagined when I first started enjoying beer back when I had hair and a waistline. I come from a time when three national breweries had a complete stranglehold on the market here in BC and when you ordered draft beer, you didn't even bother to order by brand because they all tasted the same and often pubs only had one brewery's beers to offer. Now you not only have multiple styles and categories of beers to choose from, but also many choices within those different styles.

And even as recently as a few years back, although there was a growing selection of craft beers available on the market, many were from cities like Seattle, Portland and San Diego. Now our BC beers are legitimately in the mix and earning more and more tap and shelf space and they are there own their own merit, not just because they are locally brewed.

Before I start getting hate mail from those who love their beers from down south, this is not a knock against those brews or the establishments who serve them. Great craft beer is great craft beer and I am lucky to live in a city where there is a seemingly endless supply of craft beers from all over North America and beyond. But what I am finding more often than not is that I am drinking BC craft beer and not just because it is BC craft beer, but because I prefer them over the others available. I can honestly say that about 90% of the beers I purchase and consume are BC craft beers and like at Tap & Barrel, every month of the year is, for me, BCCBM.

I think because of the huge wave of momentum the BC craft beer industry is riding on right now, you may see more licensees concentrate more heavily on the local breweries. It would be great if the LDB caught on and stopped restricting  the number of listings they give BC breweries, which they should be promoting and supporting as much as possible, not ignoring, especially since domestic craft beer sales are one of the only segments of the alcohol market that is consistently growing. This would help grow the BC craft beer market and as the market grows, it will be able to support more and more breweries giving the consumer more and more choices.

What a great time to be a craft beer lover and living in BC!

Posted by Paddy Treavor at 5:19 PM