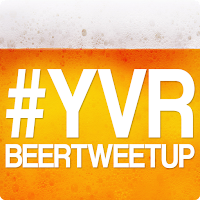 Last week I was asked to come speak about CAMRA Vancouver at the latest #YVRBeerTweetup held at the Sunset Grill in Kitsilano. I have to tell you the truth, I actually had little idea as to what a "BeerTweetup" consisted of and the idea of sitting in a restaurant sending tweets to people sitting within speaking distance of me sounded a little too much on the social-media geek side of things, but since the word beer was included in the title and the beers included locally-brewed cask-conditioned beers, I thought I'd give this tweetup thing a go.

And I have to tell you, I was more than pleasantly surprised. I would even go as far as to say that I am now a #YVRBeerTweetup kinda guy and am working on those thumb-typing skills so that this 40something techno-dinosaur can produce witty, 140-character-or-less thoughts and observations to keep up with the young, hip Twitter crowd at the next event to be held at Smiley's Pub, on May 2nd at 5 PM.


The #YVRBeerTweetup is a concept dreamed up by Twitter users @JonnyBeers and @VancityBeerGuy, otherwise known as Jonny and Nick, who wanted to create a social networking event focusing on craft beers. The idea was to get a group of Twitter users together, in the same room, luring them there with the promise of great craft beer, prizes and the chance to meet other Twitter users face-to-face. The event at the Sunset Grill, held Wednesday, April 4, was the third #YVRBeerTweetup and by from what I saw, the idea is one that has taken off faster than you can tweet, @vaneastbeerblog loves IPA. According to @JonnyBeers, the first event, held at Doolin's Irish Pub Feb 1, drew around 100 people while the 2nd event, held at Malone's Urban Drinkery March 7, and the Sunset Grill event drew close to 175 each.

"It's been very popular from the start and keeps growing," said @JonnyBeers. "We have a good core group of people who have been to each tweetup. It's a really good mix of everyone from Twitter. There's a few regular people from the craftbeer community as well as lots of new people so it's good to put the two together to help grow that community."

It truly was a good mix of folks really enjoying themselves, with brewers, brewery owners and craft-beer industry shakers and movers tweeting and drinking it up amongst many who are not among the usual suspects found at local craft beer events. I know from a CAMRA Vancouver point of view, the event was a great way to attract non-CAMRA members, who do not usually attend craft beer events, and expand the local craft beer scene beyond the already converted and it is the type of event, as CAMRA Vancouver President, I would love to see CAMRA support more and more.

#YVRBeerTweetup organizers hope to keep things fresh and  keep growing the event, while maintaining the focus on local craft beer.

"In terms of growth we have a few ideas up our sleeves, and some exciting announcements to come in the next few months," states @JonnyBeers. "One of our goals is to have at least one cask (Sunset Grill had three!!) at each event, but also we like the idea of launching new beers, new breweries or venues. There's also the possibility of having actual trips or tours. Eventually we'll expand the tweetup outside of Vancouver as there's lots of great things going on all around BC."

To keep up-to-date on #YVRBeerTweetup events and information, check out their Facebook page, follow them on Twitter @YVRBeerTweetup or email yvrbeertweetup@gmail.com. If you can, I highly recommend making the effort to get to Smiley's for the next event May 2nd. Smiley's has a very decent line-up of beers on tap and if the three casks present at the last tweetup are any indication, there will be some great real ale to sample as well. And don't worry if the Canucks are playing as Smiley has televisions located around the room so you won't miss out on the action while tweeting and tippling.
Posted by Paddy Treavor at 2:59 AM