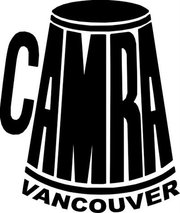 While on the subject of CAMRA, I think it is important to note CAMRA BC has just announced their combined membership (individual & corporate members) has gone over the 1,000 mark!!
Congratulations.
The more voices speaking in concert, the louder the voice. I know there are a growing number of craft beer lovers out there in BC who are not CAMRA members. Many have stated to myself the reason they are not members is that CAMRA BC and its BC chapters are nothing more than a beer appreciation group...well, see the above post about the FUSS Campaign for proof that CAMRA chapters in BC are getting more active and doing more than organizing drink-ups.
Next stop, 5,000 members!!
Click here to join in the fun and help support the craft beer consumers of this province in their quest to be able to more readily access locally-brewed, craft beers served in the proper manner for fair prices. It is a great way to educate yourself about craft beer, home brewing and the craft beer industry in general and gives you a chance to have a voice and help shape our local craft beer community.
Posted by Paddy Treavor at 12:07 PM