Reports & Ramblings From a Beer-Addled Mind #5 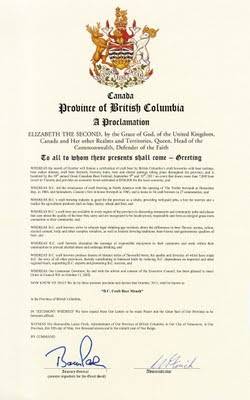 Craft Beer Month Just Around the Corner
Although its announcement came without much fanfare and without the knowledge of a great deal of people involved in the BC craft beer industry, hospitality industry and consuming craft beer, October has been officially declared B.C. Craft Beer Month by the Province of British Columbia in a proclamation signed by Attorney General, Barry Penner.
What this means to lovers of craft beer here in BC is not quite known at this time, but, if Craft Beer Month lives up to its billing on the proclamation, "the month of October will feature a celebration of craft beer by British Columbia's craft breweries with beer tastings, beer maker dinners, craft beer festivals, brewery tours, beer and cheese pairings taking place throughout the province," and will raise the awareness of the importance of the craft beer industry in BC and the advantages of supporting that industry which benefits both the consumer, by producing a unique, quality products and to the economy of the province as a whole by providing jobs in all sectors and boosting the economy.
This is a time for BC craft breweries & brew pubs to strut their stuff and shine the spotlight on themselves and could prove to be a lot of fun for those of us out there who love craft beer. It is also the time for those pubs, taphouses, restaurants and cafes that feature BC craft beers to celebrate supporting our local craft beer industry by creating events in their establishments to add to the celebrations.
Let's hope the word spreads and those who have a vested interest in the craft beer industry in BC participate in BC Craft Beer Month and make this the celebration it can be. Although CAMRA has a few tricks up its sleeve, the Craft Beer Month celebrations will depend heavily on whether the breweries and licensees can get organized and creative to promote craft beer and raise awareness amongst the public above and beyond the usual craft beer community. I know of a few establishments that have some plans to highlight BC craft beers and I hope more get on board and join in the fun.

Stay tuned in the next few months to find out when and where BC Craft Beer Month celebrations will be taking place.
Too Hop To Handle - A Little Info on What is in Store

This Saturday local Hopheads who managed to snag a ticket to CAMRA Vancouver's  Too Hop To Handle festival will be doing their happy dance as they make their way to St. Augustine's Craft Brew House and Kitchen.

The event, which is sold out earlier this week, will feature hoppy offerings, many of the one-of-a-kind variety, from 14 breweries - 13 from BC and one from Seattle, Washington - which will challenge even the most hardcore and adventurous IPA drinkers. Three of the brews being offered clock in at over 90 IBU's, with one measuring 92 IBU's and 8% ABV, another upping the ante at 100 IBU's and 9% ABV and another pushing the limits completly, hitting an unbelievable 151 IBU's at 9% ABV!

If those numbers having your taste buds running for cover, don't fret as many of the offerings are not pushing the limits as the ones listed above and run in the range from 5.5%-7.7% ABV and 50-70 IBU's. With the number of beers available being lower than many festivals, having at least one 5 oz taster of each, over the course of the day, should be manageable. St Augustine's chef, Dion Ouellet. will also be creating some fare to pair with the hop bomb of choice and help absorb the alcohol for those trying to do the complete circuit.

CAMRA Vancouver will also be there, setting up a booth to sign up new members and sell CAMRA swag. If you aren't already a member, bring along an extra $25 and sign up, get involved and help shape the landscape of the Vancouver craft beer community!!
See you there...but if you want to guarantee any sort of reasonable conversation, catch me early as I don't think I'll be able to resist hitting the big-hop, high-octane beers for long...

For those of you hedonistic types who like a little titillation with your craft beer mark August 19th on your calendar and get ready to have some fun.

The Roundhouse is teaming up with CAMRA Vancouver and Vancouver Craft Beer Week to present Beerlesque, "a celebration of burlesque and BC craft beer" which hopes to raise dollars for the Roundhouse Community Arts & Recreation Centre.

Tickets are $50, inclusive of all beer and entertainment and are available on-line at the above link. There is a full evening of entertainment on the slate and those attending are being encouraged to dress up as a prize will be awarded for the best costume. Beers to provided by Driftwood, Phillips, Russell, Red Truck and Vancouver Island Brewing. Food carts from ReUp BBQ and Ursu Korean BBQ will be on site.