Reports and Ramblings from A Beer-Addled Mind 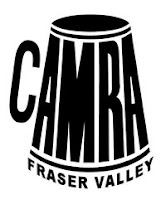 CAMRA BC Expands to the Fraser Valley
For those of you who haven't heard, CAMRA BC has quietly expanded to the Fraser Valley. On January 27th, with little fanfare, CAMRA Fraser Valley was founded, bringing CAMRA BC's chapter count up to four. The Fraser Valley branch joins existing branches Victoria, Vancouver and Penticton, giving CAMRA BC and even stronger voice here in Southern British Columbia. CAMRA Fraser Valley is headed by branch president Micheal Victory who reported, as of Feb 02/11, to VanEast Beer Blog (VEBB) that they currently have approximately 30 members.
"We will be building on an already growing craft beer scene here in the Valley. With the likes of Firefly (Fine Wines and Ales), Kingfishers (Waterfront Bar and Grill) and Mission Springs(Brew Pub) we are optimistic about Camra Fraser Valley - even in the short term," President Victory informed VEBB via email. "We'll likely have a member's appreciation event in the spring, and then something larger in the summer."
The branch is still in the beginning stages of setting up its social networking sites and website but there is some contact information available to those interested in joining the branch or gathering information.  Their website is currently under construction but you can currently access email contact links. You can also find them on Facebook and Twitter @CAMRA_FraserVal.

Say No to Exclusive Beer Agreements!!
Recently I popped into one of the restaurants on Commercial Drive that features craft beer to speak to one of the managers about some business. During the course of our conversation, we started to talk about the lack of local representation amongst the restaurant's numerous taps, with both myself and the manager wondering aloud why this was. The manager mentioned that he had wanted to get one of the Lower Mainland's most well-known and popular craft beers on tap, as it was one of his personal favorites, but was informed he could not because another restaurant on the Drive had "an exclusive" deal to be the only establishment to carry said beer on Commercial Drive.
Now stop me if I am wrong, but doesn't this go against the whole movement to make craft beer more readily available to a wider cross-section of people in our fair city? While groups like CAMRA, individual advocates and bloggers like myself are doing our best to promote local craft beer in order, at least in part, so that we can convince as many places to offer local craft beer to their patrons, therefore increasing the sales for local breweries , it seems some of these breweries are limiting their options by giving "exclusive" deals. I can understand, from a business point of view, a restaurant or bar, if they really wanted to sell a certain brand of beer, making a deal with the brewery to only carry their beers, but this was not the case here. The establishment with the "exclusive" also sells beers from other craft breweries.
From a consumer point of view and as a lover of this particular beer, this disturbs me. I would love to be able to walk into any establishment in the city and be able to quaff the beers I love. I hope this notion of "exclusive rights" does not become a trend and spread as it will set back the craft beer movement and force people to possibly go to establishments they don't want to frequent, to get the beer they crave and love. In the end, this move could backfire on the breweries making these deals as people may just be forced to chose beer from their competion.
Isn't the idea to sell beer, not restrict sales? If a respected and dedicated craft taphouse wants to sell a certain brand of beer, you would think that brewery would be happy to have their beers sold there.
In a perfect world every pub and restaurant would be a "free house" dedicated to bringing the best craft beer products they could get their hands on, especially local products, serving these beers in the proper manner and with the respect they deserve. Let's keep fighting to open up the market, promote our favourite beers and advocate and campaign to get them in as many bars, restaurants and liquors stores as we possibly can. I know this can work from personal experiencing, having harrassed my local government liquor store to bring in a product until they get tired of me and relent. I have also, in the past, connected bar/restaurant owners with local brewers I know to try to get some of my favourite craft beers on tap in bars and restaurants that I frequent and in some cases, it has worked (lets you know how much $$s I spend on beers in these places!). Vancouver has come a long way over the past few years in regards to places where you can get great, local craft beers but lets keep pushing forward because there is still a lot of room for improvement. Let's encourage our local breweries to spread the love and work with us to promote craft beers not create "exclusive" places we must go to get their products.

BeerTourist Getting Ready to Roll 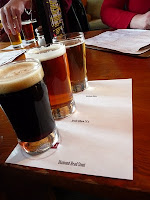 Late last year a group called BeerTourist popped out of nowhere to begin promoting beer tourism by chartering buses and going on road trips to sample great crafts beers afar. They organized two trips, one to Washington State to visit Skagit Brewery, Rockfish Grill/Anecortes Brewery and Boundary Bay Brewery and the other north, to Howe Sound Brewery for a daqy of beer and fun. Both trips were successful and for the most part, with one or two exceptions, BeerTourist recieved great feedback.
I have it on good authourity (I am one of the founders and organizers) that BeerTourist is busy organizing for the upcoming year. No dates are set in stone, as of yet, but stay tuned for details. BeerTourist is going to try to shake it up a little this year and organize a number of different type of events. I can tell you that one of the events currently in the planning stages involves a ferry ride and a visit to a brewery that is producing some of the best beers around at the moment!
BeerTourist is curently working on their website but can be found on Facebook, Twitter @vanbeertourist or you can contact them directly at info@beertourist.ca.
Posted by Paddy Treavor at 3:57 PM